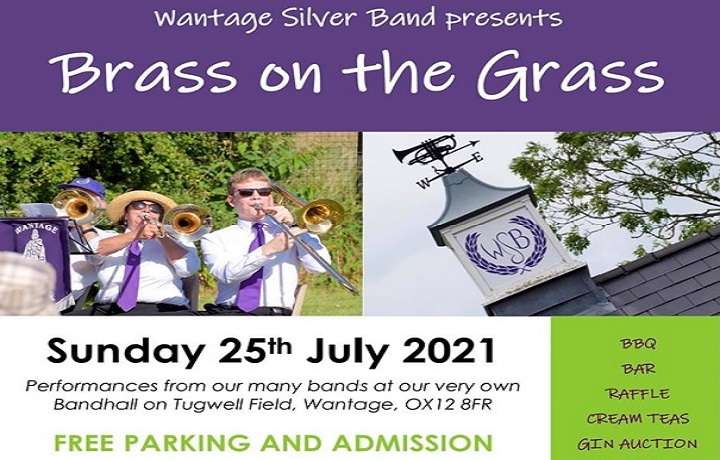 Despite the restrictions placed upon us all during the last sixteen months, Wantage Silver Band is thriving. Remarkably, through the efforts of their team of young professional musicians, over thirty new members have begun learning an instrument with the band. A combination of school demonstrations, free taster sessions and a stock of affordable and easily accessible instruments has allowed the band to excel on the gathering of new recruits.

The band is always looking for ways to continue expanding and it was only last month where another group was added to the line-up of opportunities on offer within the organisation. Wantage Percussion Academy was launched, after months of planning, led by Steve Jones, Principal Percussionist of the worlds #1 brass band, The Cory Band. Wantage Youth Brass is also set to relaunch this coming Autumn which will offer a platform for secondary age students in the organisation, and local area, to make music together. It was only in 2015 that Wantage Youth Brass made it to the Music For Youth National Festival at Birmingham Symphony Hall.

The organisation has become a victim of its own success: there are now eight full bands:

·         Weekly brass lessons offered every day including weekends to many, many young people and adult learners each week.

The bands’ rehearsal premises on Tugwell Field, Wantage, although superb has only one rehearsal hall and one tuition room, but finally, a glimmer of hope! The organisation’s annual ‘Brass on the Grass’ extravaganza will go ahead on Sunday 25th July where the launch of a fundraising campaign to build a much-needed extension will commence. Councillor Major James Sibbald, Town Mayor of Wantage, is full of praise for the band: “Wantage Silver Band has and continues to be an exemplar of community engagement and in providing musical education to Wantage and the surrounding area. Their growth from a small band of enthusiastic musicians to the enormously-accomplished current number of bands has been through the dedication of their instructors, band masters and musicians, however, this extension to the band hall is fundamental to their continued growth and Wantage Town Council are happy to support the Extension Appeal.”

The extension will provide an additional, and larger, performance hall and two additional tuition rooms. (See architect’s drawing of the view from the stage in the new hall in the image below). The band has raised over £200,000 by its own efforts and is applying for grants and donations to reach the £450,000 target. The fundraising team are confident that building can begin this year and be completed in time to celebrate the 50th anniversary of WSB in 2022. If you’d like to help by donating to the band, or offering assistance with further fundraising, please get in touch by emailing extension@wantageband.org or calling Alan Sykes on 01235 767541.