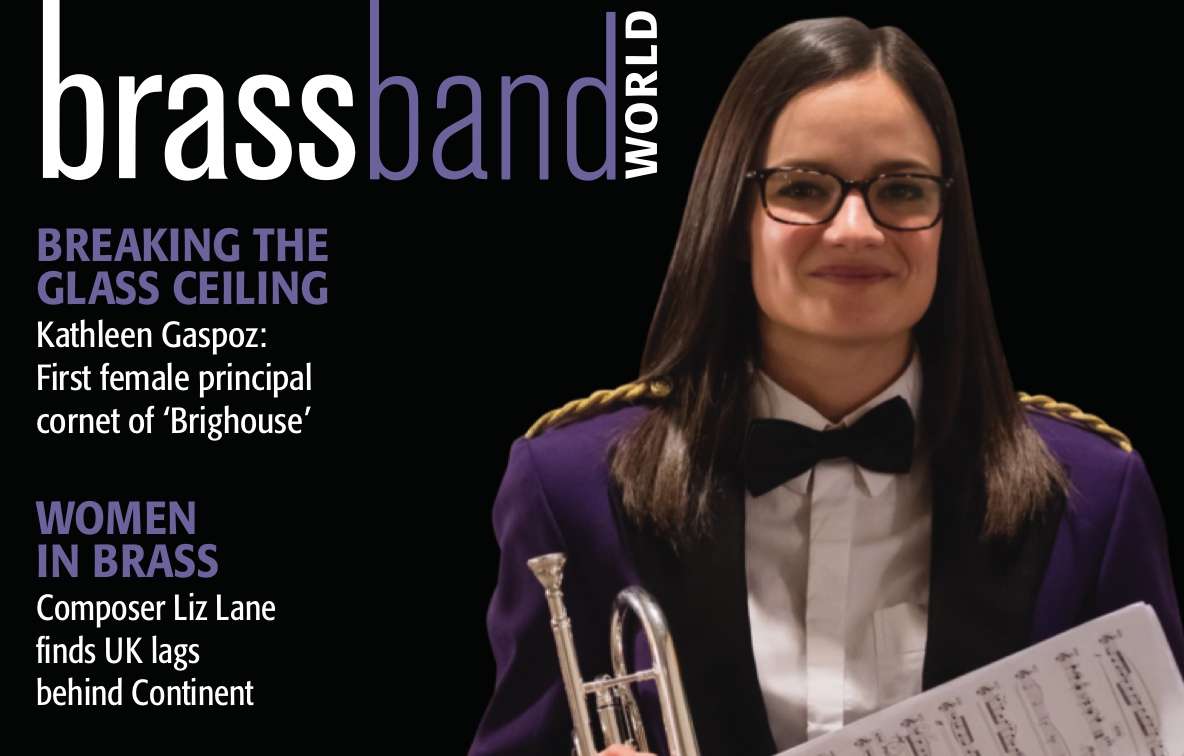 The July/August edition of Brass Band World magazine is now out and it's full with fantastic features, articles, reviews and interviews from around the globe…

VIEW FROM THE BOX
Want to win at Cheltenham…? Then read about what will impress the adjudicators in the ‘box’ at the Cheltenham National Finals on 16 and 17 September - four of the eight appointed judges – Paul Holland, Tom Davoren, Glyn Williams and Stan Lippeatt – tell competitors what they will be listening for...

PRO PRACTICE
Besson Artist, trumpet/cornet extraordinaire, adjudicator and educator, Roger Webster, considers the pros and cons of positive critique versus criticism and the negative impact that the latter can have on players in this month’s Pro Practice.

LET'S DEBATE — ‘BREAKING THE GLASS CEILING’
Leading composer, Liz Lane, debates the glass ceiling for women in the music business and uncovers opinion that UK brass banding still lags behind the Continent when it comes to appointing female players, conductors and composers.

TRIBUTE
Black Dyke baritone soloist, Katrina Marzella, paints a portrait of her friend - the teacher, composer and arranger, Bruce Fraser, who died in February this year, but whose music and teaching touched the lives of many. In addition, conductor of the Salvation Army’s International Staff Band, Dr. Stephen Cobb, pays tribute to James Williams MBE - the man and musician whose influence touched so many musicians inside and outside The Salvation Army.

SLIDING AROUND GLASGOW
Mark Good reports on Scotland’s four-day festival celebrating the virtues of the trombone.

INTERNATIONAL FEATURE
Band has broken up for the summer, but that doesn’t mean letting your musical skills gather dust for two months! Rita Arendz, Les Neish, Ian Clowes and David Childs report from the first summer schools to happen this year in Canada, Switzerland, Holland and the USA

TIPPING POINT FOR UK
Brass Bands England recently appointed a new interim CEO – Andrew Coe. He comes with a ‘big ticket’ CV in international tennis and motor sport, but how realistic are his intentions for the UK brass band community and BBE, which reaches its 50th birthday next year - Nicola Bland finds out.

WILLEBROEK RULE THE WORLD
WMC Kerkrade in Holland takes place every four years and commences with a weekend of brass band contests, including a top section battle for World rule, this time won by Belgium. Johan Jansen reports from the 18th edition, originally founded in 1949 after a high-impact concert in Kerkrade by Carlton Main Frickley.

DREAM TEAM AT TULLIS RUSSELL
John Wallace CBE returns to his boyhood band as Principal Musical Director and shares with Nicola Bland his fresh vision for the organisation’s future.

BRASS EDUCATION
Nicola Bland reports on all the latest developments at the Royal Northern College of Music, Birmingham Conservatoire, Royal Academy of Music, and the Royal Conservatoire of Scotland.

NEWS
Butlin’s to rock with high-octane acts, youth and education to shine at Brass in Concert, and Euro 2018 set-work composers revealed.

PREVIEW – FRESH HORIZONS FOR SOPRANO CORNET
Nicola Bland catches up with Cory’s ace soprano, Steve Stewart ahead of the British Open release of his debut solo CD – Over the Horizon.

CONCERT REVIEWS
James Davis savours ‘world-class’ Foden’s on the Isle of Man, Andrew Baker enjoys Sandy Smith’s ‘innovative’ Tubular Brass show at the RNCM, Alan Jenkins is blown away by musicians from four different Continents at the Black Dyke Festival, and Brenden Wheeler witnessed history in the making as the Queensbury outfit ‘rocked out’ on Glastonbury’s Pyramid Stage.

DIARY DATES
What's on around the World in August and September.

… AND ANOTHER THING
John Barber and cartoonist, Nezzy, get ready for the new contest season by brushing up on rules of engagement, set by the Co-operative Higher Authority Institute of Narcissistic Stewards Against Warmups (CHAINSAW)!