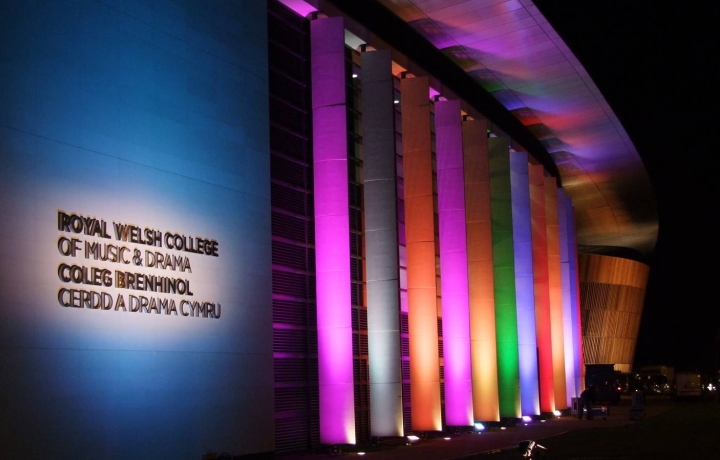 With an ever-developing Brass Band Pathway led by Dr. Robert Childs that has forged hugely beneficial links with links community bands, world-class tutors and a new Principal – the RWCMD should be top of any student’s study wishlist

The launch of the Brass Band Pathway at the Royal Welsh College of Music and Drama (RWCMD) in 2004 has led to a halcyon period in the Welsh banding community, far exceeding the achievements of its previous 170-year history. Dr. Robert Childs, Director of Band Studies at the College, reflected: "Over the past 15 years, Welsh bands have won more than 20 ‘National’ titles and most were either conducted by, or included RWCMD students. When competing at the European Championships this year, the line-up of Cory (also College Band-in-Residence) included 15 past or current RWCMD students - testimony to the effectiveness of this community partnership. Cory is not the only band to have embraced and benefitted from the RWCMD. Most South Wales bands include our students including Tredegar, which in 2015 gave the World première of Gavin Higgins’s ballet, Dark Arteries, at Sadler's Wells in collaboration with Rambert. Again, a number of RWCMD musicians were involved and work of this type is hugely important in developing the College’s role as a conservatoire and community arts centre."

As part of the RWCMD’s specialist Brass Band Pathway, two brass bands meet regularly to explore repertoire and concert opportunities, supported by lectures in brass band composing, arranging, conducting and adjudicating. In 2014, the RWCMD Brass Band was guest at the Royal Nova Scotia International Tattoo, Canada, and College students now perform at this high-profile event every year. In addition to in-house concerts at the College’s Dora Stoutzker Hall, the band also performs at other major venues annually and is looking forward to performing at Cambridge University next year.

The RWCMD continually strives to develop its outstanding brass band programme; 2018 saw Andrew Wareham become the inaugural student to graduate with a Masters in brass band conducting. The College is equally committed to developing its Junior Department’s brass band studies by fostering even closer links with the community.

Justifiably proud of the burgeoning Brass Band Pathway, Dr. Childs expressed his delight at its exceptional reputation, modestly commenting: "Much of the pathway’s success is attributed to a passionate group of world-class tutors, including Tom Hutchinson, Chris Turner, Owen Farr, and David Childs, as well as to excellent facilities and a very supportive senior management team. I look forward to continuing its pioneering development.”

The College’s new principal, Professor Helena Gaunt adds: “The College’s success in brass banding speaks for itself, and I am delighted that the National Conservatoire continually delivers on its promise to Wales, to support and nurture the brass musicians of the future.“