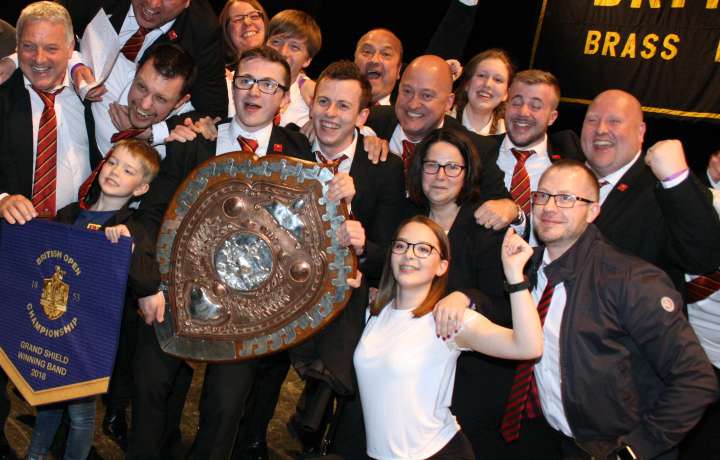 The Spring Festival and, in particular, the Grand Shield provided the usual sharp contrasts of standard and interpretive approach as bands jostled in the snakes and ladders game of requalifying for the British Open. Christopher Thomas brings Grand Shield action, Malcolm Wood the Senior Cup and John James the Senor Trophy.

‘In a contest of sharply divided musical fortunes in the Opera House of Blackpool’s Winter Gardens, Hammonds Saltaire and a jubilant runner-up, Aldbourne, achieved Grand Shield glory, earning promotion to the British Open and an opportunity to tackle Bert Appermont’s A Brussels Requiem in Birmingham’s Symphony Hall this September.
During the course of the day, Peter Graham’s The Triumph of Time proved to be the subject of serious debate in the Opera House and Galleon Bar, conversation raging about its difficulty and the perennial question surrounding the wisdom of utilising a former ‘Open’ test-piece as the vehicle for testing the bands in the Grand Shield. As always, the perennial counter-argument is that two bands capable of credibly challenging in Birmingham need to emerge from the Grand Shield, meaning that when it comes to quality, it remains one of the most divided contests in the banding calendar, once again evidenced this year by the drastically varying standard from the front-runners to those that simply found the challenges of the test-piece too much to bear…’