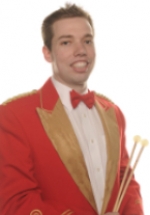 James started as a cornet player with his local brass band Chepstow Town Band under the guidance of Rob Ayers and Keith Phillips before taking up percussion at the age of 11. From here James moved to the Cwmbran Band conducted by John Burns before being asked to join Tredegar Band at the age of 17 making his debut at the European Chapmpionships in Brussels in 2002. While at Tredegar, James became a member of the percussion section of the National Youth Brass Band of Wales between 2004/05.

Having spent a few years at Tredegar playing at all the major contests, James moved across the Severn Bridge at the end of 2005 to join the Flowers Band where he spent five happy years winning the Grand Shield in ‘07, Area titles 07/10, Mineworkers 2006/11 and many other prize winning performances along the way.

During this time James spent a lot of time gaining experience as a guest player with bands such as Leyland, Fairy’s, Desford, Grimethorpe & Fodens. In February 2011 the opportunity came along for James to fulfil his lifelong ambition and join the world famous Cory Band winning the British Open in 2011.