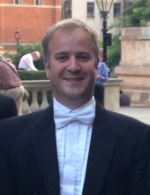 Originally from Norfolk, Oliver began playing the Tenor Horn aged 6, performing with Bernard Matthews Norfolk Brass Band and Norwich Area Young Brass.  At age 11 he turned his attention to the French Horn studying at the Junior Guildhall School of Music. During his formative years Oliver was principal horn of the National Children’s Orchestra of Great Britain and the National Youth Wind Orchestra of Great Britain, where he met his wife!

Oliver continued his musical studies at the Royal College of Music where he gained a Bachelor of Music and a Postgraduate diploma in performance. In 2005 Oliver relocated to Wales, where in addition to his teaching commitments he has been fortunate to frequently perform as a freelance musician with ensembles such as the BBC National Orchestra of Wales and Welsh National Opera. He has appeared in the BBC Proms, been broadcast on BBC Radio 3, made several recordings both commercial and for Television.