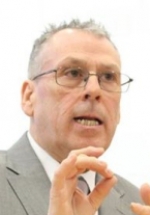 David Hirst began his musical career at the age of ten with the local village band playing cornet: he made rapid progress on the instrument, and, at the age of fourteen was accepted into the Yorkshire Imperial Metals Band on the solo cornet bench. Two years later David joined the Black Dyke Mills Band on Soprano Cornet, where he had four successful years including wins at the British Open, National and World Championships. In 1972 David began studying music at the University of Huddersfield, being taught trumpet by Maurice Murphy. A growing interest in Orchestral and Big Band playing led him to being one of the early members of the James Shepherd Versatile Brass. In 1978 David rejoined the Black Dyke Mills Band on Soprano cornet enjoying further contest success. By the mid '70's he was conducting various village bands before being appointed in 1980 as the Musical Director of the Andrews Heat for Hire Band. After five successful years he then took over as Musical Director at the Lewington Yamaha Band followed by two years as the Resident Conductor at Black Dyke conducting the band during their historic tour of Australia in 1988. In 1990 David returned to the Yorkshire Imperial Band conducting them at the British Open, All England Masters and as prize-winners at the “Brass in Concert” competition over three successive years. In 1994 David was invited to join the World Famous Brighouse & Rastrick Band as Resident Musical Director, relinquishing this position in 2005 after 11 years. During this period the Band were National Champions (1997 & 8), European Champions (1998) and All England Masters Champions (1997 & 2001) in addition to Yorkshire Area Champions (1995, 1997 and 2003). Since leaving B&R David has worked with Grimethorpe, Faireys and Fodens and is regularly invited to undertake weekend test piece workshops for lower section bands. David is one of the country's most experienced adjudicators and has officiated at all levels in the Regionals, Lower Section Finals, Butlins, and local competitions in the UK. David\'s adjudication record can be found by following the link to the Brass Band Results website: http://brassbandresults.co.uk/adjudicators/david-hirst/ David has been a member of ABBA since its inception and has delivered numerous seminars on a variety of topics for the organisation. David is currently Secretary for the Association of Brass Band Adjudicators. The Cottage, Main Street, Milton, Newark NG22 0PP