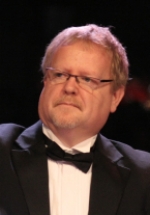 Russell was born in Scotland in 1968, and in his early years learned to play the cornet.

By the time he was twelve years old he had already won the junior solo Championships of both Scotland and Great Britain.

Whilst at university, Russell was a member of the world famous Black Dyke Mills Brass Band.

Yamaha became aware of Russell’s talents and soon a relationship was established with him as an internationally endorsed soloist.

This appointment helped Russell establish himself as one of the most sought after Brass soloists and clinicians in the world today.

Russell started his conducting career in Norway, accepting the position of resident conductor with the Stavanger Brass Band. During this time Russell helped them further their reputation as one of the finest brass ensembles in the world by recording several CDs, and fusing links with other musical groups and composers, including the popular Scandinavian folk group Vamp, Stig Roar Wigestrand (Jazz Violin), and Torstein Aagaard Nilsen.

He also enhanced their name internationally with tours of Scotland, England, and Latvia.

Over the years Russell has won many competitions, including the Norwegian, Danish, Japanese, French, Scottish, English, and British National Brass Band Championships.