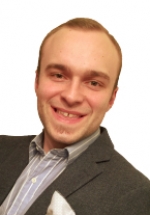 Mark Good is a journalist, musician and public relations professional originally hailing from Campbeltown, on the west coast of Scotland.

In 2008, he was awarded a scholarship to study bass trombone at the Royal Conservatoire of Scotland, graduating in July 2012.

A former member of Whitburn Band, Mark performed with the band across the UK and further afield. He was appointed Musical Director of Renfrew Burgh Band in January 2012. The successful partnership has included victories at the Scottish Championships, Scottish Challenge Cup and Fife Festival of Brass.

With a passion for radio, Mark has presented the Brass Band Show on Argyll FM since 2003. He graduated with a Masters (distinction) in multimedia journalism from Glasgow Caledonian University in 2013. Mark's journalistic career was underpinned by two years working as a reporter with the Clydebank Post and Your Radio, before moving into public relations.