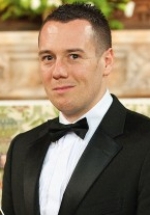 John is heralded as one of the leading performers on the cornet, flugel horn and trumpet and is great demand as a soloist, conductor, adjudicator and educator. John started playing brass instruments from the tender age of 13. His banding development included playing for Lancashire Youth Brass Band, Lostock Hall Memorial Band, Freckleton Band, the BT Band and the Fairey Band. He gained a place to study music at the Royal Northern College of Music in Manchester, achieving a 2:1 qualification.

John currently holds the position of Head of Performing Arts and Music at the Lostock Hall Community High School and Arts College (Preston), and is a teaching fellow of the University of Cumbria, and a “Fast Track Teacher” and a “Champion Teacher” for Musical Futures. He has also been awarded the title of “Champion” with Lancashire Music Service for his work as a dynamic head of music in the Lancashire region.