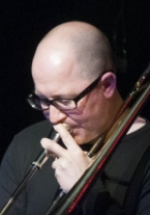 John Barber is widely regarded as one of the most versatile trombonists in Britain today. He is Principal Trombone of the Foden's Brass Band, a position he has held since joining from the Black Dyke Band in 1996.

John has worked with most of the North West's leading orchestras including the Halle, Royal Liverpool Philharmonic, Camerata and Welsh National Orchestra, whilst non-orchestral groups including the Andy Prior Big Band, Apitos, and the Richard Iles Big Band.

In November 1996 John accepted the position of lead trombone with the Tony Evans Orchestra in Monte Carlo where he was resident for a year, supporting acts such as Elton John, Rod Stewart, Liza Minelli, The Gypsy Kings and Paul Anka. On his return to the UK, John undertook an MA at Salford University in Composition and Arranging under the direction of the highly acclaimed Composer, Peter Graham. His Composition and Arranging studies have since led to special arrangements for the Halle Brass Ensemble and the Nemo Brass Quintet.

Since 1997 John has been a member of the New Orleans/Salsa Group, Brasshoppers with whom he has performed across Europe including appearances at the Cork Jazz Festival, Cognac Blues Festival, Paris Jazz Festival and the Slida Festival in Norway. The group also played their part in a unique piece of history when they played at the Millennium Dome on the Millennium New Year’s Eve.

Along with Andy Scott (Saxophone) and Dave Hassle (Drums) John is a founding member of the funk / Jazz group DB5 . He is also a member of the Blue Juice Band (with whom he played piano at Steven Gerrard’s wedding and the A Band with Matthew Ford. In 2006 John appeared with Tony Hadley (Spandau Ballet) and Martin Fry (ABC) with the 80's All Star band in Manheim, Germany.  John has been the trombone tutor to both the National Youth Brass Band of Scotland and the National Youth Brass Band of Great Britain. He has appeared with Gloria Estefan on the X-factor and is a member of Soul Tubes.

John is presently Director of the Love Music Trust, the Music Education Hub for Cheshire East and Director of Music at the Sandbach School where he leads the Big Band. Derek Watkins, Georgie Fame, Gordon Campbell, Simon Willescroft, Elliot Henshaw, Matt Ford, Colin Skinner, Andy Scott and Johnny Heyes have all appeared with the group. The band have toured Boston (New Hampshire), Berlin, Istanbul, Singapore and New Zealand. In 2008 the Band made their debut at the Edinburgh Festival, which they revisited in 2010.

John is proud to be an endorsee of Antoine Courtois Musical Instruments and is a member of the 'Courtois Trombones' along with Mark Templeton (Principal Trombone of the London Philharmonic Orchestra) Davur Magnusson (Principal of the Royal National Scottish Orchestra) and Richard Ashmore (Bass Trombone Ulster Orchestra).

In 2014 John recorded his first solo CD with Foden’s Band.