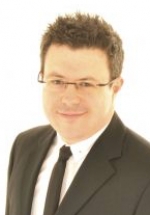 Dr. David Thornton is regarded as one of the foremost euphonium players and teachers of his generation and has a global reputation. His work as a soloist, conductor and educator is renowned throughout the brass playing world to have a distinct hallmark of extreme virtuosity, professionalism and an ability to connect with audiences like few others in his field.

His work within the brass band world has seen him at the top flight for almost twenty years. He has held solo euphonium positions with the Fairey Band (1997-2000), the Black Dyke Band (2000-2010) and the Brighouse & Rastrick Band (2011-2015) having won five National titles, three British Opens and one European Championship during this time. David is currently the solo euphonium player with the world famous Foden's Band.

Born in Nottingham in 1978, David began his euphonium lessons at just eight years old and only five years later became the first ever euphonium player to gain a place at Chetham’s School of Music, one of the UK’s most prestigious institutions for specialist musical education.

As a recording artist David has released four solo albums. His debut CD, ‘Three Worlds’, was awarded Solo CD of the Year for 2004 by the British Bandsman magazine. David released his second solo album, ‘Devil’s Duel’ in May 2007, Sempre Libera in January 2014 and Parallel Realities in March 2015. Furthermore, David features as a soloist on 30 different albums of band music, including ‘Epic Brass’ and ‘Jubilee Brass’ - live recordings of two concerts at the Royal Albert Hall.

Considering David’s relatively young age, his achievements in education are also quite remarkable. He tutors at the RNCM, the University of Huddersfield and Chetham's School of Music. His current and former students already hold principal positions in many leading bands around the UK.

David Thornton is a Sterling Musical Instruments performing artist and consultant and plays exclusively on the Sterling Virtuoso Euphonium. He also holds an undergraduate degree from the Royal Northern College of Music and a DMA from the University of Salford.