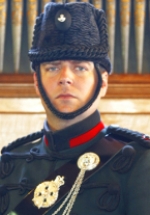 Brenden hails from Cairns, Australia where his passion for brass playing began in the tropical climate of Far North Queensland. With strong encouragement from his parents he began playing the trombone and euphonium at the age of 9 in his local brass band, Cairns Brass. He quickly progressed through his schools music programme and joined the North Queensland Philharmonic Orchestra at the age of 15. Brenden was also selected to perform in the International Youth Band at the Opening Ceremony of the 2000 Olympic Game’s held in Sydney. At 17 years of age, Brenden became the 2002 Queensland Youth Champion of Champions held in Maryborough.

Brenden began tertiary education at the Queensland Conservatorium of Music in Brisbane in 2003. During this time, he established his musical links with the Brisbane Excelsior Band, Australia’s foremost brass band and was part of the band’s first historic victory at the Australian National Championships. Brenden has since returned from the UK on two occasions to retain this title for three consecutive years. In September 2004, Brenden moved to the UK to continue his studies at the University of Salford with leading brass educationalist and fellow Australian, Professor David King. He quickly established himself in the UK brass music scene and only six months after his arrival, Brenden won the prestigious 2005 BBC Radio 2 Young Brass Soloist title where he was accompanied by the world famous Black Dyke Band.

Since arriving in the UK, Brenden has played euphonium for some of the country’s leading bands including the Grimethorpe Colliery, Leyland and the Brighouse and Rastrick bands. He has performed as a soloist in some of the UK’s premiere venues including the Royal Albert Hall - London, Birmingham’s Symphony Hall, The Sage - Gateshead, The Waterfront Hall - Belfast, Glasgow’s Royal Concert Hall and the Bridgewater Hall in his now residence of Manchester. Brenden has also toured extensively throughout Europe and Asia as a soloist. As principal euphonium of Leyland Band, Brenden represented England at the 2006 European Brass Band Championships, has recorded numerous CDs and has been a featured soloist in the bands many successful tours. He was also awarded the Best Soloist prize at the inaugural English National Championships held at The Lowry, Manchester and more recently the award for the best instrumentalist at the Grenland International Brass Festival in Norway.

Brenden joined the British Army on the 1st of June 2009 to become a professional musician within the Corps of Army Music. After completing training he was posted to his first band The Heavy Cavalry & Cambrai Band (HC&C Band) in Catterick, North Yorkshire, January 2010. As a musician within the HC&C Band he has toured many countries including Germany and Canada extensively. This period has also seen Brenden perform to such guests as HRH Prince Charles and HRH Queen Elizabeth II. On the 19th March 2012, Brenden will take up a new post at the Band of the King’s Division in Preston, Lancashire.

Brenden lives with his wife Katrina Marzella in Harrogate. In his spare time he enjoys Wakeboarding, Travelling and supporting Manchester United.