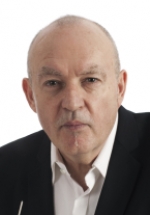 Allan grew up amongst the intense brass band community of Northern England. He was taught to play the cornet by his father and eventually played principal cornet with both the Wingates band and Fodens band. After a post graduate course, on trumpet, under Howard Snell, at the Royal Northern College of Music in Manchester he embarked upon a freelance career playing with many of Great Britains` leading orchestras including the London Symphony Orchestra.

He now lives in Norway and is a member of the Bergen Philharmonic Orchestra. In addition Allan has played a major role in the Norwegian band `explosion`, conducting Krohnengen brass band, Tertnes brass, Eikanger Bjørsvik musikklag and Manger musikklag.

In 1991 he took up the position of  professional musical director to one of the worlds leading brass bands , Brighouse and Rastrick band from Yorkshire, England. Then followed the most successful period in the bands 120 year long history. The high points being the National Champion band of Great Britain in 1997 and 1998. The all England Masters Champions in 1998 and the European Champions the same year.

In 2001 Allan was awarded the John Henry Isles Medal from the Worshipful Company of Musicians of the City of London for his services to the brass band movement.

In 2002 , this time as musical director for the Williams Fairey band from Manchester, Allan and his new band won the National Championships of Great Britain. This success of  was repeated again in 2003.

In October 2006, together with Grimethorpe Colliery band,  Allan won the National Championships of  Great Britain for a fifth time and was voted conductor of the year on the internet site, 4barsrest.com. In feb. 2007 Stavanger brass band , conducted by Allan , won the Norwegian brass band championships.

In 2007 the success from the previous year with Grimethorpe at the National Championships was repeated giving him six victories in all and again in 2007 Allan was voted `Conductor of the Year. In June of 2007 and again in 2008 Grimethorpe Colliery Band together with Allan won the newly started English National competition held in Preston.

2008 saw the appearance of Stavanger brass band with Allan as conductor in `Brass in Concert` in Newcastle, England where the band gained a very creditable 2nd place, the highest placing ever received by a foreign band. The band also had the honour of performing the Gala concert where they performed one of Allan`s concert projects `When Edvard meets Edward at an Exhibition` (see brass band concerts), to much critical acclaim.

2009 saw the release of the C.D. 'Jabulani,' again, amongst great media interest. This was a project where Stavanger Brass Band and Allan Withington joined forces with the English composer/arranger, Robin Dewhurst.

In June of 2009 a new project was started together with Soli Brass from Holland. This was the start of the Allan Withington Annual Conductor Summer School. Eighteen students from all over Europe descended upon Leeuwarden for a six day residential course to work in depth on various elements of band conducting and creative programme planning (see Conducting Summer School).

In November 2010 Grimethorpe Colliery band conducted by Allan won the 'Brass in Concert' competition and a guest appearance with the Fodens Band saw a first place at the North West Regional competition. From 1st January 2012 Allan will be engaged as professional conductor of Fodens.

Success in 2012 came in the second half of the year. Fodens, conducted by Allan, won both the British Open Championships and the National Championships creating a historic double. The last time the band won the two events in the same season was in 1910. A solid win in Norway followed as Allan conducted Stavanger Brass Band at the 'Siddis Brass' championships in Stavanger. As a result of his success in 2012, Allan was voted 'Conductor of the Year' by the website, 4 barsrest.

In 2013 Allan, together the Manger Musikklag from Norway, managed a fantastic first place at the World Music Contest held in Kerkrade, Holland Later in the year and with yet another innovative programme, Allan and Stavanger won `Siddis Brass` in November. Appearances conducting the brass and percussion section of Tonhalle Orchestra, Zurich, in a spectacular Christmas concert rounded off the year.

In recent years, Allan has expanded his conducting experience to include professional symphony orchestras notably the Bergen Philharmonic Orchestra in many of his own theatre productions.

He has, in the space of the last few seasons, conducted a wide variety of musical styles. From a full programme of music to celebrate the Anniversary of Wolfgang Amadeus Mozart to a programme of contemporary music with composers John Adams and Michæl Doherty featured. Dance music has become an important part of his repertoire and he has conducted Classical ballet , Riverdance and Contemporary dance with the Bergen based dance company `Carthe Blanche.' Light classics and the many arrangements featured in Allan's concert productions have provided a great base from which to expand his repertoire. Many years as a professional player gives him a great understanding of the workings of an orchestra and the usual limited rehearsal time associated with these events suits Allan`s effective and efficient way of working.