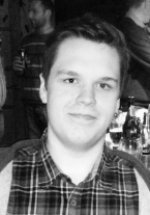 Ben started learning the piano aged 7 in his home town of Glossop, Derbyshire and after 8 years of playing he decided to take up a new instrument, after dabbling on euphonium he finally settled on french horn. Two years later, in 2010, Ben attended the Junior Royal Northern College of Music where he studied french horn under Tom Redmond, and piano/composition as his second study. During his time there, Ben played in the JRNCM Brass Band (albeit on french horn!) which sparked his interest in the brass band movement.

Ben started his music degree at the University of Huddersfield in 2011, where he majored in composition, whilst also playing in the University Symphonic Wind Orchestra under Phillip McCann. During his studies at university, Ben’s interest in the brass band movement grew as he attended his first Yorkshire Regional Championships, and witnessed CMFCB win 1st prize in 2013! This further inspiration lead Ben to compose his first major work for brass band entitled ‘The Mist’, a programmatic work which received its world premiere by the University Brass Band and Phillip McCann in 2013. During his final year at university Ben went on to compose more music for brass band including another major work, ‘Aurora Borealis’, and an opener entitled ‘Momentum’, which was part of the winning programme for the University of Huddersfield Brass Band at the UniBrass Championships 2014.

After graduating from university in 2014, Ben was offered the position of Composer/Arranger in Residence at CMFCB which he gladly accepted. Since then he has written a variety of new solos and concert music for the band including a cornet solo, ‘The First Light’, for Kirsty Abbotts and a world premiere at the Brass in Concert Championships. Alongside his position as composer in residence at the band, Ben is also studying for a Masters by Research at the University of Huddersfield. Ben has very much enjoyed his time so far as composer in residence at CMFCB and hopes to have a long and successful time with the band.