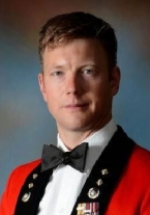 Sam Hairsine is a Director of Music in the Royal Marines. He started his musical life as a choral scholar at Lincoln Cathedral, where he sang on several recordings and live broadcasts, as well as the daily services. On returning to East Yorkshire he took up the euphonium under Robert Childs and was a member of the National Youth Brass Band of Great Britain, EYMS band and became principal euphonium of the other Championship Section band in the area. He also gained an Associateship from the Royal College of Music before auditioning for a place in the Royal Marines Band Service.

Sam joined the RMBS after his A Levels and commenced a career that has taken him around the world as a euphonium and cello player. He has performed solos in some of the best venues in the UK and Europe, and enjoyed a year in Naples with the AFSOUTH NATO Band. Sam also studied for his degree and achieved a first class BMus(hons). He was part of the deployments to the North Arabian Gulf in 2003 and to Afghanistan on Op HERRICK 9, where music played a vital role alongside the myriad military tasks RM Band ranks performed.

Whilst learning to conduct under Malcolm Binney at the Royal Marines School of Music, he conducted both Royal Marines and a number of amateur ensembles including the Portsmouth Military Wives Choir, Phoenix Brass and Spinnaker Brass band. During his Bandmasters’ Course he was awarded the Silver Medal of the Worshipful Company of Musicians as well as the LRSM in Wind Band Direction and AMusTCL in Music Theory. He also enjoyed conducting masterclasses in Sherborne and at the RNCM. Sam was Commissioned in 2014 and after a brief spell as the RMBS Projects Officer was Assistant Director of Music (Training) until last September.

Sam enjoys rugby and parkour and is currently studying for a MMus in conducting at the Royal Northern College of Music.