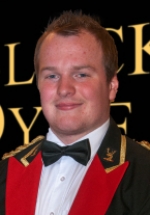 Jonathan Bates is the 21 year old Principal Horn of the Black Dyke Band, a position he has held since 2013, following spells with the Elland, Skelmanthorpe ‘B’ (now Prospect) Band, Carlton Main and Brighouse and Rastrick bands. Throughout that period, he has won all the major non-entertainment contests in the calendar, with the latest completing the ‘double’ with Black Dyke in 2014.

He joined the National Youth Brass Band of Great Britain in Easter 2007 aged just 12, which made him the youngest member in the band’s history. From there he went on to complete 14 courses (7 as principal) and also was awarded the prestigious ‘Harry Mortimer Soloist Prize’ and ‘Bernard & Harold Tovey Memorial Prize’.

In 2010, he reached the final of the BBC Radio 2 Young Brass Soloist of the Year, an achievement he repeated the following year before becoming only the 2nd ever Tenor Horn player to reach the Brass Category final of the BBC Young Musician of the Year competition, televised on BBC 4. Also in 2012, Jonathan recorded the sample CD for the ABRSM grade syllabus books for the Tenor Horn repertoire, featuring new works by Lucy Pankhurst, Peter Meechan, Tom Davoren and Philip Sparke.