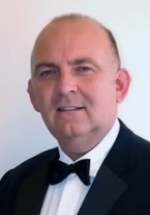 Jeremy Wise was born into a musical family and received early tuition from his father at six. He was awarded a Music Scholarship to St Albans School where he studied under Simon Lindley and an Exhibitioners Scholarship to the Royal Academy of Music studying trumpet and piano. He has featured in a number of TV and Radio Broadcasts and toured Australia, New Zealand, Canada and Europe as a performer. Since conducting he has enjoyed considerable success with many bands, most notably John Laing Hendon, First City Brass and The Cory Band. In the mid 1990's he was the resident conductor of the Brighouse and Rastrick Band and has appeared as guest conductor in Germany and Switzerland.