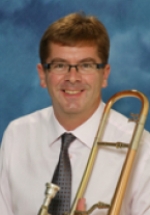 Nick Hudson’s musical foundations are firmly rooted within the brass band movement. He started playing at the age of eight and following initial tuition from his father and a brief spell in The Salvation Army, Nick was appointed principal trombone of the world famous Foden Motor Works Brass Band at the age of only fifteen. During his fourteen years in that position he established an international reputation as one of Europe's finest trombone players and teachers. He has presented master classes and performed in concert halls as far afield as Australia, Israel, Canada, the USA and throughout Europe. In addition he was the featured soloist at the National Brass Band Championships Gala Concert at the Royal Albert Hall in London on four occasions

He premiered the Wilfred Heaton Trombone Concerto live on BBC Radio 3 and gave the first public performance of Philip Wilby's concertino White Knuckle Ride - both composed especially for him.

Recently he returned from a successful tour of Spain where he performed the Holst ‘Concertante for Trombone and Wind Band’ and the Derek Bourgeois ‘Trombone Concerto’ at the World Wind Band Association conference in Valencia following enthusiastic reviews from music critics and trombone players throughout Europe.

Nick released his first solo recording ‘Anthology’ with the Britannia Building Society Band in 1996 followed by the highly successful ‘New Horizons’ in 2002 featuring a diverse range of styles from jazz, avante garde and brass band repertoire. Another recent recording features a range of specially commissioned works for tenor and bass trombone where Nick plays alongside Douglas Yeo, Bass Trombone with the Boston Symphony Orchestra. His most recent addition to his discography is collaboration with Andrew Justice and the Enfield Citadel Band of The Salvation Army. The recording features original solo and duet repertoire and has already received critical acclaim.

In June 2007 Nick also gave the premiere recording of Elizabeth Raum’s Fantasy for Trombone and Brass Band. In addition to these recordings Nick has been featured soloist on twenty other releases with ensembles throughout the UK and overseas.

He has travelled worldwide coaching players and is trombone tutor at the celebrated Brass Band Summer School in Framlingham.

He was featured soloist and clinician at the Leeds University Chain Brass Festival, a weeklong course of workshops and seminars for professional players from all over Europe. He has also given recitals and lectures at the Royal Northern College of Music, Royal Academy of Music (Stockholm), Melbourne School of Performing Arts, Newcastle School of Music (Australia), Goteborgs Universitet Artisten, RAF Cranwell, the Norwegian National Wind Band Championships in Trondheim, the British Trombone Society Festival at the Guildhall School of Music and London’s famous 100 Club.

In 2007 Nick was particularly pleased to be awarded The Don Lusher Memorial Prize for his playing at the recent Brass in Concert Championships.

In addition to demands as a performer and clinician for Michael Rath Instruments, Nick is a regular editorial contributor and writer for many specialist brass publications. He is also a writer and advisor to the British Trombone Society.