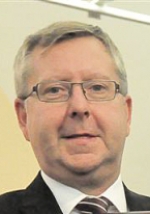 David Roberts started his playing career with the Rothwell Temperance Band progressing through the Junior Band to become the principal cornet player at the age of 14. In 1984 he left the band to study music at Manger Folkehogskule, Norway. On his return, he joined the Yorkshire Imperial Band and the National Youth Band of Great Britain, and won the best instrumentalist at the North of England Solo Championships. In 1990 he moved to the Black Dyke Mills Band and won the European, British Open and National Championships. In 1995 he was part of the band's wonderful grand slam year. His playing has taken him all over the world including winning two European Championships in Holland and Luxembourg. He has also taken part in many concert appearances in Norway, Switzerland, Belgium and even Africa. He has performed in many of the world's great concert halls such as the Royal Albert Hall in London and Carnegie Hall in New York. He has performed on over 25 CDs and taken part in many broadcasts on BBC Radio 2 and 3 and has played with the London Symphony Brass Ensemble. David is a brass teacher at Leeds Grammar School and also Bradford Grammar School, and is also a tutor with the National Youth Brass Band. He began conducting in 1993 and a has guided the band to no less than eighteen victories including five Yorkshire Championships, the 2006 "International Masters" and the 2009 Grand Shield. David is in demand as a conductor and has accepted invitations to take bands in Denmark and Norway. His very first international competition was successful as he won the Norwegian National Championships with the Sandefjord Brass Symposium in the Grieg Hall, Bergen.