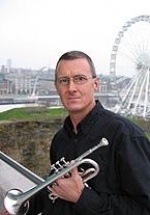 Richard Martin is Principal Trumpet with the Northern Sinfonia and has worked with most of the country’s leading orchestras. He studied at the Royal College of Music with Richard Walton and prior to that with William Lang. He was a member of the English Brass Ensemble for six years and has toured the world extensively with them, including visits to America, Canada, Europe and Asia.

He has been Principal Trumpet of Royal Northern Sinfonia since 1988. During this time Richard has performed many of the great trumpet features with the orchestra, including Bach’s 2nd Brandenberg Concerto, through to the 20th Century.

He started playing in brass banding, and continues to do so. He has made a number of recordings, and the latest is a joint venture with the local Reg Vardy Band to raise funds for The Clarence Adoo Trust.