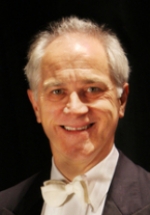 James Gourlay was born in Scotland where, at the age of ten, he was ‘volunteered’ to play in his school brass band. Being tallest in class, he was serendipitously given the tuba, an instrument he loves and continues to promote all over the world.

After much success as a solo champion, James entered the Royal College of Music but left after a short time to become, at eighteen, the Principal Tuba of the City of Birmingham Symphony Orchestra. Four years later, he took up the same position with the BBC Symphony Orchestra, with which he worked for ten years. He then performed for an additional ten years with the Orchestra of the Zürich Opera.

James’s career as a chamber musician and soloist continues to flourish. He has been a member of the Philip Jones and English Brass Ensembles with which he has toured the world and as a soloist, he continues to perform extensively. He has recorded five solo CDs, the latest, British Tuba Concertos, recorded for the Naxos label with the Royal Ballet Sinfonia, received international critical acclaim.

James’s commitment to music education is a continuing passion. He has been Head of Wind and Percussion at the Royal Northern College of Music and Deputy Principal and Music Director at the Royal Scottish Academy of Music and Drama. He holds a Doctor of Musical Arts Degree from Salford University, a Masters Degree from Leeds University, a Fellowship of the Royal Northern College of Music, a Fellowship of the London College of Music and is also a recipient of the Henry Iles Medal, presented by the Worshipful Company of Musicians for services to the Brass Band Movement. Currently, James is International Vice President of the International Tuba and Euphonium Association, former Director of Music of the world-famous Grimethorpe Colliery Band and now Artistic Director of the River City Brass.