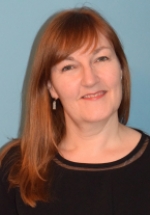 Anne was educated in Our Lady’s High School, Motherwell from 1977 to 1983. She then graduated with a B. Mus (Hons) from Glasgow University in 1988. Her musical experience is wide-ranging, having been involved in choirs, brass bands, orchestras and wind bands throughout her career.

Her earliest musical training was on tenor horn, moving to baritone at the age of 14. At the same time, the school music department was given an oboe and Anne was the lucky pupil to have the first chance to play it. She studied oboe with Hughina Naylor and later with Judith Herd and began playing piano at that time.

Whilst studying at Glasgow University, Anne began conducting the University brass ensemble and wind band. She was later given the chance to conduct the University orchestra.

Anne’s banding career began in Newmains Band in 1979. She moved to the CWS Glasgow band in 1985 and success followed shortly, when the band became the first Scottish band to lift the National Championship title in 1990. She moved to the Whitburn Band and remained a member until October 2010 when she left to pursue a career in conducting.

She is currently Head of Performance and Design Faculty at St Margaret's Academy in Livingston.