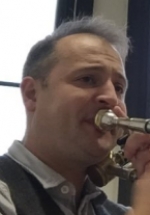 While holding the position of principal trombone with the Brighouse and Rastrick band and during studies at the Royal Northern College of Music Jonathan auditioned and was appointed as the founder Principal trombone of the Remix Ensemble. In 2003, and 3 years in Portugal Jonathan returned to the UK as a freelance player and appeared as guest principal trombone with many of the UKs finest orchestras including the Philharmonia, English National Opera and the Hallé. In 2007 Jonathan took the Queens shilling and spent a happy eight years in fancy dress with the Central Band of the Royal Air Force and the Royal Air Force Squadronaires. In 2015, hungry for the sound of a string section, Jonathan once again embarked on a freelance career and now finds himself again working in London’s Music Machine. Jonathan is Married to Alex and has a seven year old son Bradley who enjoys the P-bone.