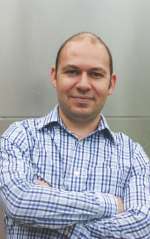 Andrew Wainwright is an award-winning composer whose music is performed internationally by orchestras, brass bands, wind bands and choirs. In 2018 he was awarded 1st place in the RWCMD Cory Band Composition Competition with his piece 'The Spirit of St. Louis', an international contest held by the world's No. 1 ranked brass band.

In 2017 Andrew's composition, 'Fearless', was voted as the winner of the New York Staff Band's inaugural international composers' competition. In the same year he was commissioned to write two pieces by New York Philharmonic Brass for its annual Holiday Brass concert at David Geffen Hall, hosted by Philip Smith and featuring guest soloist Doc Severinsen. In 2014 his composition, 'The Smoke that Thunders', was one of five finalists in the Salford International Composers' Competition. Andrew first received acclaim for his compositional skills when in 1997 he came runner-up in television's Performance, The Arts Channel's Young Composer of the Year for Great Britain.

Andrew's music features on over 20 commercial recordings. In November 2012, a CD of his music was released by Virtuosi GUS Band, featuring Faryl Smith. Entitled Christmas Fantasia - The Music of Andrew Wainwright, it was launched on the Doyen label. His arrangements of several of Karl Jenkins' major works have garnered critical acclaim, including the hour-long The Armed Man - A Mass for Peace, which Andrew arranged for brass band, choir and organ. It has been performed by numerous groups around the world and a CD was produced of the work in May 2007, followed by a DVD by Black Dyke Band in 2010 of a live performance at Birmingham Symphony Hall. More recently, Andrew's arrangement of Jenkins' Stabat Mater was premièred by Cory Band at the European Brass Band Championships in Montreux, Switzerland and has since been performed by the band at Symphony Hall, Birmingham and broadcast on BBC Radio 2. In November 2014, Grimethorpe Colliery Band premièred Andrew's arrangement of Jenkins' Gloria at the Brass in Concert Gala Concert at The Sage Gateshead.

In 2015, Andrew's composition, Illuminate, was performed at London's O2 Arena by the Chicago Staff Band as part of The Salvation Army's Boundless International Congress. In March 2012, Andrew was privileged to be a guest of the New York Staff Band for its 125th Anniversary weekend and was commissioned to write a piece for the occasion, Fanfare & Theme on Before the Throne. Andrew conducted the combined bands of the New York Staff and Future All Stars in the premiere performance.

As a performer, conductor and tutor, Andrew has completed tours to Cyprus, Denmark, Jamaica, Kenya, Mexico, Norway, Portugal, Switzerland, the USA and Zambia. He has played with a number of musical groups including Brass Band Aid Celebrity Band, Chicago Staff Band, Hendon Band and Virtuosi GUS Band, although the highlight of his playing career was performing with World and European Champions, Cory Band, at the Royal Albert Hall. Andrew features as a soloist on Kettering Citadel Band's CD That's the Spirit.