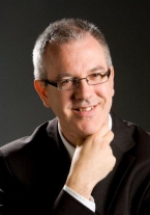 Luc Vertommen was born in Leest (near Mechelen). In that little village, he got acquainted with the band music scene by way of the local fanfare band. He moved on to study music theory and practise the cornet and the piano at the music academies of Mechelen and Willebroek. Luc completed his higher musical education at the Leuven Lemmens Institute with a triple Laureate Certificate for Trumpet, Music History and Band Conducting. Subsequently, he obtained a First Prize Chamber Music at the Brussels Royal Music Conservatory. Later, he also obtained a master's degree in Wind Band Conducting at the Leuven Lemmens institute..

After his training, Luc worked with many leading Belgian (symphonic) orchestra's and ensembles as free lance trumpet player. Shortly after, he was immersed full time in the band music world: on the one hand as Brass and Instrumental Ensemble teacher at the music academy of Zaventem and as Band Conducting teacher at the Servais Academy of Halle. On the other hand as conductor of Brass Band Buizingen, of the Royal Fanfare Band 'De Berthoutzonen' of Hallaar and Delta Brass Zeeland (NL).

As a cornet player Luc Vertommen was laureate at the National Soloist Contest of the then Flemish Brass Band Federation. He played with Brass Band Midden Brabant and Brass Band Willebroek.
Luc has written two books around the band music theme. He regularly arranges music for band, which is recorded on several CDs. At the moment, Luc is compiling a series of CDs and books on the history of Flemish band music, entitled 'Anthology of Flemish Band Music'.

Luc Vertommen has his own publishing company, Traxon Music/Band Press, with an extended catalogue containing more than 200 original works for band by Flemish composers. Luc Vertommen is a member of W.A.S.B.E, the musical commission of the Royal Music Federation of Flemish Brabant and of the brass band commission of the Flemish Amateur Music Organisation (Vlamo).