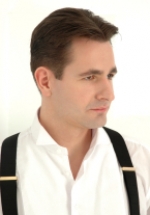 Craig studied at the United Kingdom's University of Salford, gaining first his BA (Hons) then Masters degree there, studying with Dr Roy Newsome and Prof David King. Whilst at the university, Craig was awarded the Roy Newsome conducting prize as the outstanding undergraduate conductor of the academic year 2000.

Today Craig is a member of the Production Team of the Royal Nova Scotia International Tattoo, where he is one of two Assistant Directors of this, the world’s largest annual indoor show. He has also worked as a production consultant to the annual Canadian Beating Retreat “Fortissimo” held annually on Parliament Hill, Ottawa, Ontario (2007-10); travelled to Russia, to work with the Kremlin Zoria Festival on the first Tattoo held in Moscow's Red Square (2007); and to Tripoli, Libya, where he acted as Director of Music and Production Consultant to the World Military Music Festival (a Tattoo and parade held in Green Square, Tripoli in celebration of the 40th anniversary of the Libyan Arab Jamahereya). In 2010 & 2011 Craig travelled to Crete, Greece, acting as Director of Music and Production Consultant for the first Crete International Tattoo and Mediterranean International Festival of Arts. In 2013 he then visited Kharkiv, Ukraine to undertake a major parade and performances in the presence of then Ukrainian President, marking the 70th anniversary of the liberation of the city and region in 1943. In 2015 Craig participated in and tour managed Grimethorpe Colliery Band's 10 date nationwide concert tour of Australia.

In addition to all of the above Craig also still supplies brass tuition to numerous schools and young musicians in his home county of Rhondda Cynon Taf, in conjunction with the Cory Academy. He is a serving member of the Executive Council of Music Centre Wales, Ty Cerdd; a member of the Board of Directors of Sound Affairs and Community Music Wales; a trustee of the famous Grimethorpe Colliery Band; and Musical Director of both Symphonic Brass Wales and Lewis-Merthyr Bands.