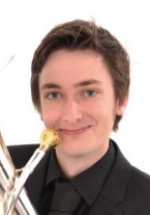 James McLeod is currently Principal Euphonium with the Leyland Band and has been since 2013. A graduate of the Royal Welsh College of Music and Drama James played with the Cory Band for two years, before relocating to the North of England to join Leyland.  A former member of the National Childrens and National Youth Brass Band of Great Britain as well as the National Youth Wind Orchestra, James has performed extensively throughout Europe and Asia performing and teaching.