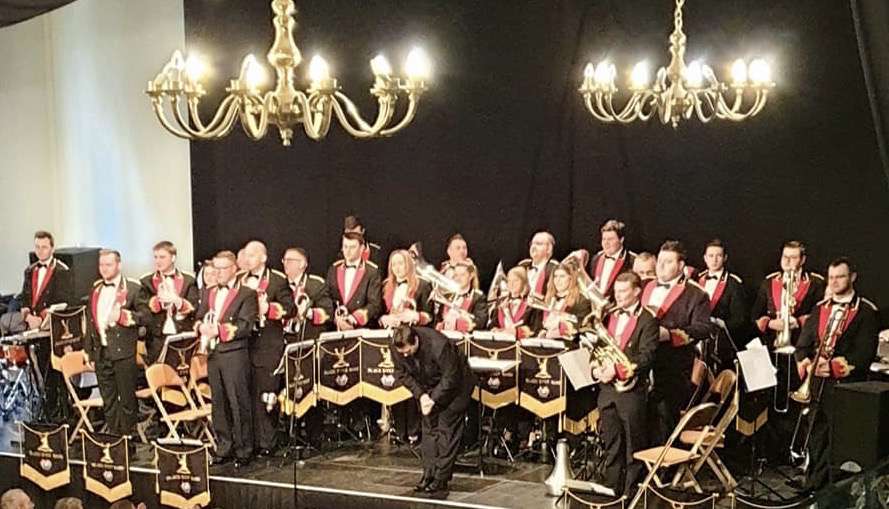 Black Dyke Band recently made its eagerly awaited jaunt to the South West of England, performing to a capacity audience at Stroud’s Subscription Rooms under the baton of guest conductor David Childs. Having performed at Yeovil’s Octagon Theatre the night before, the band were in fine form on this Sunday afternoon, launching into their programme with Queensbury - the band’s famous signature march. Dvorak’s popular Carnival Overture followed, demonstrating devilish technique allied with a wonderfully balanced and controlled sound befitting the venue’s acoustic.

In a programme that featured no less than five soloists, principal cornetist Richard Marshall was the first to rise to his feet with Bellstedt’s somewhat neglected gem, Princess Alice. Displaying his customary artistry, Richard showed just why he is regarded as one of the finest cornetists of his generation, before the rest of his cornet section joined him for a high-octane performance of the Harry James big band favourite, Trumpet Blues and Cantabile.

A dynamic trilogy of James Bond movie themes followed, beginning with John Barry’s iconic score, On Her Majesty’s Secret Service. The dulcet flugelhorn tones of Zoe Lovatt-Cooper and Black Dyke’s horn section then came to the fore in Nobody Does it Better, before soprano cornetist Connor Lennon brought the band’s 007 tribute to a blistering close with Live and Let Die.

Having been treated to a fantastic collection of arrangements, it was also refreshing to hear a selection of original concert works in this well-constructed programme. Dan Price’s Morse code inspired Peacemakers brought the first half to a dramatic close with narration by Matthew Routley, whilst the second half opened with Paul Lovatt-Cooper’s rousing Horizons.

A trio of wonderfully talented young musicians were next to be featured as the band presented its Soloist Showcase. Siobhan Bates (tenor horn) and Michael Cavanagh (baritone) chose to showcase their lyrical qualities with sublime performances of Over the Rainbow and Carrickfergus respectively, whilst Daniel Thomas (euphonium) completed this portion of the programme with two movements from Philip Wilby’s Euphonium Concerto, subtitled Sarejevo Song and Greek Dance. With David Childs conducting the young euphonium soloist, it was perhaps fitting that David’s father Robert, the work’s dedicatee and former Black Dyke principal euphonium, was in the audience to hear such a commanding performance hallmarked by outstanding technique and tone quality.

Variety was a welcome feature of Black Dyke’s programme, and through its Big Band Set, the band’s versatility was demonstrated with impressive performances of Sweet Georgia Brown and Lil’ Darlin’, in which Tim Hammond (cornet) and Connor Lennon (soprano) exchanged tasteful improvisations, before Mark Freeh’s up-beat arrangement of Ol’ Man River showcased some superb kit playing by Matthew Rigg.

Howard Snell’s masterful setting of March: The Pines of the Appian Way has been a popular finale to brass band programmes for many years, but it isn’t often heard preluded by Pines of the Villa Borghese – another movement from Respighi’s four-movement symphonic tone poem. This colourful addition gave renewed vitality to a finale that brought the programme to an exciting climax, leading to shouts for ‘more’ from the enthusiastic capacity audience.

Concluding the concert before their 200-mile journey back home to Queensbury, Black Dyke duly obliged with Rossini’s popular Finale from William Tell Overture, dispatched with ease at break-neck speed! Thank you, David Childs and Black Dyke Band, for a wonderful afternoon’s entertainment.