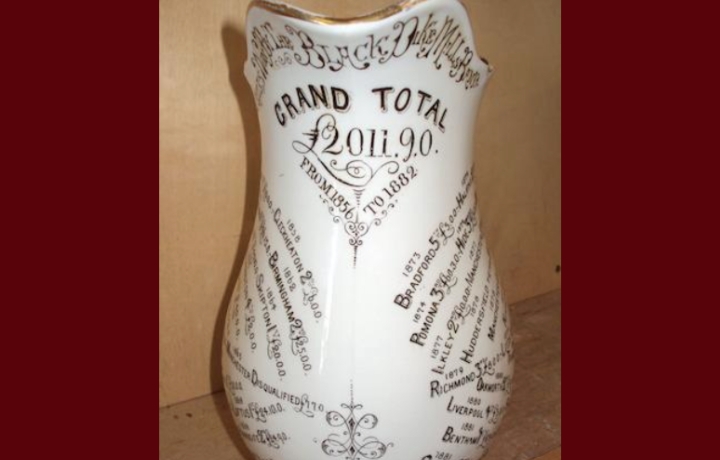 Black Dyke has been reunited with a beautiful memento of its rich history, after being presented with a rare commemorative water jug dating from 1883.

It is one of just a few now in existence that records the prizes won by the 'Black Dike Band' at venues throughout the Great Britain from 1856 to 1882.

The jug is one of around 50 thought to have been made, of which three are now in the possession of the band, the latest thanks to the generosity of Les Bower on behalf of himself and his late wife Irene, who used to live in Queensbury.

It had been in the Bower family for over 60 years, and even featured on the Antiques Roadshow. Les thought that the rightful place for the jug was to be re-united with the band, and so contacted them to present it into their safekeeping.

Black Dyke Secretary David Hirst said, "Black Dyke has a wonderful heritage which we take great pride in and which has been celebrated in many ways since its inception in 1855. This beautiful commemorative jug is such a rarity and will join just two others we have on display in the bandroom for visitors from all over the world to enjoy. We are extremely grateful to Les and Irene for their kind donation to the band, which we will treasure for generations of Pondasher supporters."