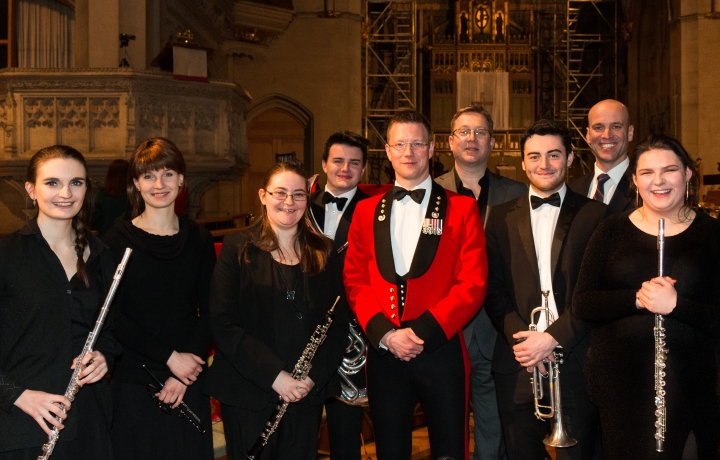 Something new and special took place in Portsmouth last month as members of the Royal Northern College of Music (RNCM) and a member of the National Youth Brass Band of Great Britain (NYBBGB) joined The Band of HM Royal Marines Collingwood for the third in its Spring Concert series at St. Mary’s Church, Fratton, on 25 February.

The concert, including works by Tichelli, Grainger, Ito and the UFO Concerto by de Meij, was the culmination of the inaugural Graduate Placement Scheme - a week-long work experience package from 21-26 February, which aimed to provide music students with the opportunity to rehearse, socialise and perform alongside Royal Marines musicians.

a rewarding and enjoyable experience. This year’s Placement Scheme included five undergraduates from the RNCM, along with 18-year old Dominic Hurley from the National Youth Brass Band of Great Britain.

For many, the highlight of the concert was Johan de Meij’s UFO Concerto performed by BdCpl Steven Boyes and conducted by Capt. Sam Hairsine, who is currently engaged in Postgraduate Conducting studies at the RNCM.

This was a rare opportunity for Capt. Hairsine to collaborate with his Band Service and college friends, and he commented: "It was fantastic to be back in front of a Royal Marines Band, but particularly with my fellow RNCM students in it. I was really pleased that they got to see the calibre of soloist we have through the UFO Concerto that I was conducting, but also to spend a week with the RM musicians on a concert of serious repertoire.” RNCM fourth-year student, Ben, said: “The week was both fun and

informative. The Marines have fantastic bands, with opportunities to perform across the world in venues that many professional musicians could only dream of. The band has such a strong dedication to its work and the feeling of unity is incredibly strong. I had a great week and would recommend it to anybody.”

By all accounts the inaugural Graduate Placement Scheme was a resounding success and the intention is to run the ‘Placement’ at the same time next year. In the meantime, if you know someone who may wish to find out more about careers in the Royal Marines Band Service, they should call 03456003777 or visit www.royalnavy.mod.uk/rmbs for more information.