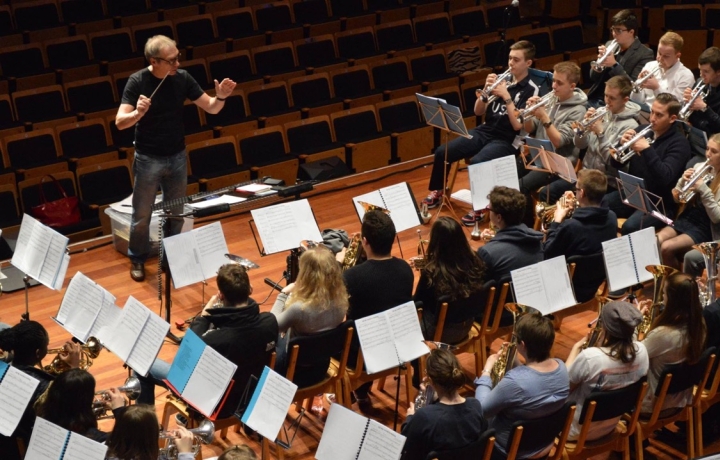 Nineteen years ago, The Salvation Army’s annual Territorial Youth Band Course was inaugurated - in part perhaps as a response to regulation changes relating to membership expectations and the release of The Salvation Army’s band music to the wider banding world. The idea was the brainchild of Dr. Stephen Cobb, whose vision was, as far as possible, to merge the very best of Salvation Army and non-Salvation Army musical environments. The purpose of the week is to develop spiritual awareness, leadership skills and musical gifts - and the underlying notion is that, in all of these areas, young people can achieve their full potential within The Salvation Army.

Nineteen years on, the band and its sister group, the Territorial Youth Choir, are strong and vibrant. The courses are both over-subscribed and musical standards have never been higher!

The most recent Territorial Youth Band course from 15-19 February was held in Bournemouth with Stephen Cobb as its Director. Working alongside him during the week are such illustrious musicians as Derick Kane, Philip Cobb and Paul Sharman, and The Salvation Army’s ethos is understood by all of the students, who work hard during the day with a rehearsal schedule that is not dissimilar to that of the National Youth Brass Band of Great Britain.

Throughout the week, visitors are encouraged to visit and, each year, a special guest is also invited to work with the group. This year, Dr. Robert Childs agreed to be the guest to rehearse the band in two numbers: Dean Goffin’s Rhapsodic Variations: My Strength, My Tower and Dean Jones’s Glorifico Aeternum, offering the band 75 fresh insights into the music. Interviewed by Stephen Cobb, Robert Childs spoke with refreshing candour about his life, work and music. Of particular interest were his thoughts on score preparation and some of his practice routines, and his visit was reportedly truly memorable.

The culmination of the week is a concert in The Lighthouse Centre for Performing Arts in Poole - home of the Bournemouth Symphony Orchestra, which this year attracted in excess of a 1,000-strong. The evening was full of excitement, energy and variety, and the young people had the experience of high-level music making in the environment of a proper concert hall!

Stephen Cobb reflected that, for him, one of the most moving aspects of the evening was the band’s performance of Eric Ball’s The Kingdom Triumphant, commenting: “This music was written some 55 years ago by a man of such humility that he would be surprised at the way in which these young musicians appreciated and related to this wonderful music. Perhaps the fact that Eric lived just three miles away from The Lighthouse Centre made performing the piece there all the more poignant. I was certainly very aware of his presence on Friday night.”