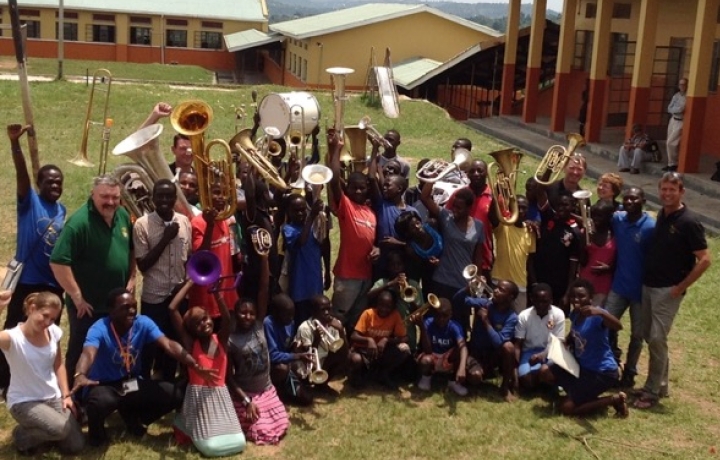 Scottish musician Alan Fernie has returned home following a trip to Africa to work with young performers in Uganda. The trip took place thanks to his association with the Brass for Africa project and saw the composer, arranger and adjudicator holding a workshop with the Mlisada Senior Band and introducing three new pieces to them. Alan also visited musicians at the Bethlehem orphanage, Good Shepherd Home, Mummy Foundation and Kampiringisa Juvenile Rehabilitation Centre.

Reflecting on the trip, Alan said: "It was like nothing I'd ever experienced before. Despite any hardships that may exist, the warmth, kindness, friendship and enthusiasm of all involved was inspiring in every way, especially the use of making music to positively develop every aspect of the lives of these young people. It is such a privilege to be involved in a small way, and my thanks go especially to Jim Trott, the guiding light behind this inspired project."

One of the musicians to benefit from Alan's visit was trombone player, Ronald Kabuye. The 20-year-old took part in the workshop session and said: "Alan's workshop was good fun. It was fantastic. He wanted to make sure we all supported each other and talked about the importance of being a team in the band. We made lots of progress and the band really benefited from working with him."

Alan's trip to Uganda was the latest venture as part of his association with the Brass for Africa project, which began in 2013 when he composed Kampala especially for the young musicians in Uganda. Jim Trott, executive director of Brass for Africa, said: "It was absolutely fantastic to welcome Alan to Uganda. He carried out a workshop and conducted the band, working on several pieces. The impact he made while he was there was wonderful. It was such a positive experience for everyone involved."