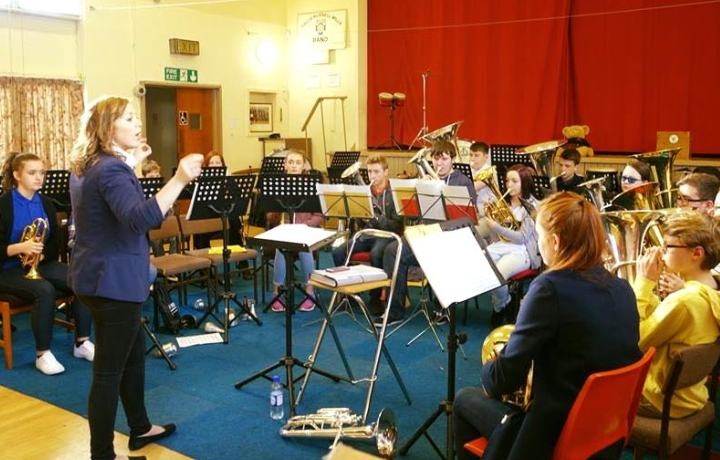 Young brass players travelled across Scotland to learn from one of the shining stars in the brass band movement. Musicians from Fife, West Lothian and Inverclyde were among those who descended on Glenrothes earlier this month to take part in the workshop with Yamaha artist and Black Dyke Band solo baritone player, Katrina Marzella.

The packed day of music making was organised in conjunction with the Scottish Brass Band Association (SBBA), Yamaha, Band Supplies and Tullis Russell Mills Youth Band. It saw Katrina offer tips and advice during a series of interactive lessons and masterclasses on topics including breathing and how to practise. She also led the band in rehearsal and shared stories of her own development as a brass player.

Reflecting on the day, Katrina said: "What a fun day I had working with Tullis Russell Mills Youth Band and everyone who travelled to Glenrothes! The young participants were so receptive and I was impressed with their work ethic and progress during the course of the day.

“We scheduled in a fair few activities: a solo recital, a masterclass with players, practice advice session, full band rehearsals, and each aspect was very well received by everyone.

“I look forward to hearing about their development and successes in the future. Huge thanks go to Band Supplies and Yamaha for making it all possible."

The workshop rounded off a busy weekend for Katrina, who adjudicated the West of Scotland Solo and Ensemble Championships in Kilmarnock the previous day. It marked a return to Scotland for the Black Dyke star, a former principal baritone player with the National Youth Brass Band of Scotland (NYBBS).

Alan Douglas, project officer with the Scottish Brass Band Association, said: “We were delighted to welcome Katrina Marzella to Fife to work with the young musicians.“

For them to work with a player of her calibre is nothing short of inspiring. They were able to learn so many hints and tips about performing from one of the best in the business. Events like these live long in the memory and help to inspire the next generation of young brass players in Scotland.”