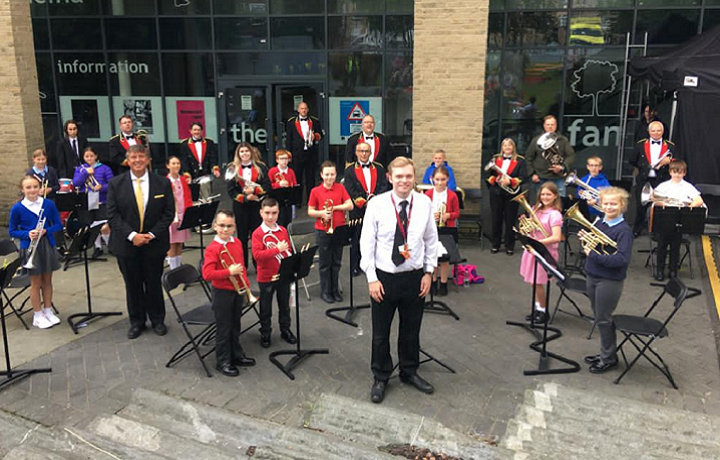 Black Dyke’s Bandstand Tour rolled into the Whit Friday country for an impromptu concert outside the iconic Delph Band Club on the weekend. The Queensbury band was joined by Delph Band and their long serving Musical Director (41 years), Phil Goodwin. Phil commented, “It was great to hear the sounds of brass music echoing down the high street, appropriately named ‘The Sound’, and let’s hope this is the first step of the Whit Friday marches being able to run next year, after a two year absence.”

Black Dyke then travelled over the Pennines from Lancashire into Barnsley, South Yorkshire where they had the opportunity of sharing and inspiring the next generation of young brass players from the Barnsley Music Centre youth band.  Their conductor Connor Lennon commented, “This was the first opportunity for many of these young players to perform in public ever, and to have the chance of listening to Black Dyke really felt like rubbing shoulders with champions.”

Black Dyke’s final leg of their tour concludes with two performances in Boscombe and Bournemouth on Saturday 17th July where they will share the platform with Boscombe S A band under the leadership of Dr Howard Evans.