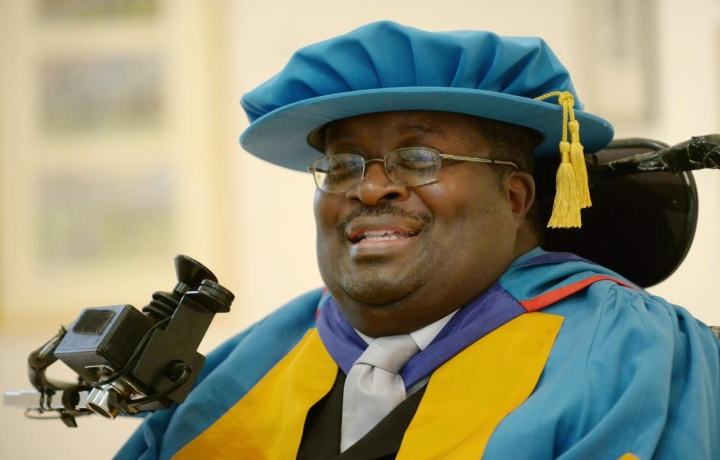 Naturally, some poignant thoughts were on former Administrator Mr Phillip Biggs, who sadly died on 11th September 2019, and there were numerous occasions when thoughts turned to the great former Artistic Director Bramwell Tovey. They both laid the path for this year’s successful course. Tom Hutchinson played an amazing recital to finish the formal part of the first evening before everyone relaxed in the virtual Bar Raymond.

Monday started with a superb workshop from Ian Porthouse on Innovative Programming and there were sectional rehearsals on Gareth Wood’s ‘Brass Triumphant’ and Peter Graham’s ‘Triumph of Time’. NYBB Alumnus Captain Samuel Hairsine gave an insightful glimpse of what it’s like being a Royal Marine bandsman and conductor. To close the evening was a Masterclass with Dr Clarence Adoo (trumpeter - pictured), which for some was the highlight of the course. Robert Childs stated, “He was truly inspirational and just right on the metal on so many levels.”

On Tuesday Tom Hutchinson gave a ‘Speedy Gonzalez’ thirty-minute Masterclass on so many aspects of brass playing: daily routines, coping with nerves, performance preparation and so much more. This was followed by a magnificent Workshop by Royal Marines Nick West (trombone) and Mark Upton (trumpet) on how to play in a ‘Swing Style’. Composer Gavin Higgins joined the band in the afternoon for an absolutely fascinating discussion with Ian Porthouse surrounding his revolutionary and ground-breaking Ballet ‘Dark Arteries’. The day concluded with an impressive informal concert given by members and staff.

On Wednesday, the final day of the virtual portion of the course, all the members had an individual lesson with their tutors. Hopefully in June the band members will all meet up ‘Live’ with Ian Porthouse to record Gareth Wood’s ‘Brass Triumphant’. This will form the foundation of a not to be missed Gala Concert to be held a few weeks later.

The Summer Course will be directed by Philip Harper, conductor of the World number 1 Cory Band and the soloist will be Internationally renowned trombone virtuoso, Ian Bousfield.