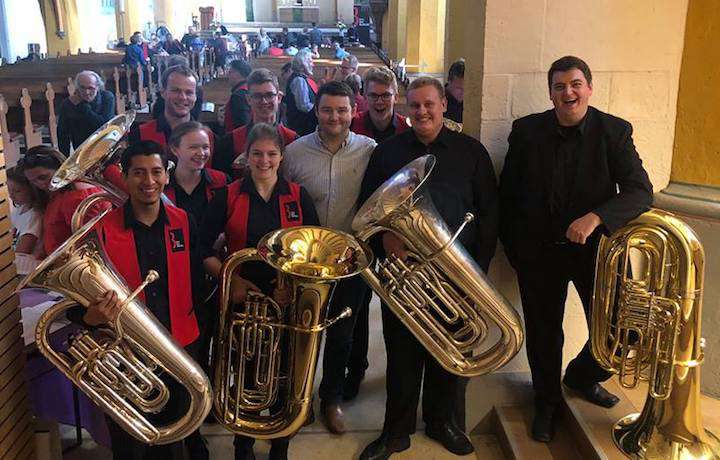 Besson Artists Les Neish and Owen Farr were the special guests of Brass Band BlechKLANG for the 3rd Jena Brass Band Workshop. The star soloists spent the weekend in Germany leading workshops and giving bespoke tuition to lucky participants throughout the two days.

As the leaders of this year's master class which began in 2016, Les and Owen attached great importance to showing the participants the relevance of proper practice with the broad message: "You have to deal intensively with your own problems without ever judging them, since all difficulties can be eliminated if one deals with them systematically and patiently." In addition to this general principle, the two Besson artists also responded to the individual questions of the twenty or so participants. Whether as an active player or as a passive listener, all in attendance were able to take away something to contribute to the further development of their own abilities.

The event, organised by Patricio Consetino and Alexander Richter, culminated in a gala concert in the Jena City Church. A spokesperson for the weekend commented, “The sounds echoing through the church were fantastic and of course the playing from our virtuoso soloists Les and Owen was absolutely top class. Thanks go to them and Besson for generously supporting the event.”

The Brass Band BlechKLANG from Jena, Germany emerged from the company orchestra, founded in 1971, of the nationally-owned enterprise Carl Zeiss Jena. Its musical directors are Alexander Richter and Patricio Cosentino. The band has successfully participated several times in the the German Brass Band Championship winning the 1st section this year. The band performs various concerts in Jena and throughout Thuringia every year.